Off-topic general discussion, for everything else.
Post Reply
17 posts

hmm they fired 2 waves then stopped.

the big issue is no US casualties. that's a very good thing, but it does complicate things a bit.
AoS Paladin 4eva

the plane thing is shit tho... i reckon they needed like a blood sacrifice in revenge... they failed hard on a military target, so they hit a civilian one...

do you reckon the news is gonna lay off trump if he causes a people's revolution in iran and wins a nobel peace prize?

i mean north korea's not developing nukes anymore, syria's chemical weps factories are gone with no reprecussions.. what if iran brings peace to the middle east...?

iran admitted it downed that plane btw. 'accident' they say, thought it was a missile.

but so far since solemani was taken out, they basically forced everyone out to mourn north korean style, a bunch of them ended up dying in a stampede.
then they fired rockets at the american base, basically asking america to destroy the country - which the big middle class wont like.
they missed with a bunch of the rockets and some didn't explode - so they've gone and shown how shit their military really is.
plus they didn't kill any military personnel, so they look like a yappy chihuahua.
then they take the rage out on a civilian target, so they're just fkin scumbags at worst, idiots at best.
and it turns out most of the people on the plane are Iranians, with zero Americans. all they did was kill their own people.
aaand they killed a bunch of Canadians, and everyone loves cuddly Canadians.

they've been shown to be incompetent, impotent, liars, a liability, and dangerous for their own people.

so i cant see them lasting long.
AoS Paladin 4eva

Calvin wrote: ↑January 12th, 2020, 3:30 pmdo you reckon the news is gonna lay off trump if he causes a people's revolution in iran and wins a nobel peace prize?

i mean north korea's not developing nukes anymore, syria's chemical weps factories are gone with no reprecussions.. what if iran brings peace to the middle east...?

what are the never-trumpers gonna say if he wins it?

can we all just take a minute to consider that if hillary had gotten in, we'd probably have had war in syria, then a proxy war with russia again, while china does it's thing unchecked. we'd have had education reform to un-gender the children, deconstructed police, all the statues and monuments torn down, mass immigration from third world countries with third world ideals. Government sanctioned censorship and thought police... and now think why. because some slimy journalist secretly recorded him making a dirty joke in private. some people are really lacking a sense of perspective.
AoS Paladin 4eva

ya know it's mad how many people tell you exactly what they are thinking, assuming they are explaining what you are thinking... projection is so bizarre.

see if you just swap a few words for synonyms, like "democracies of the world" for "new world order". or "truth" for "propaganda".
"what we *know*" for "our narrative".

He's basically saying he wants a media propaganda campaign to turn everyone against Russia.

this is like that Oliver Stone meets Putin thing, where they ask him about Russian aggression, and he shows him a map of the states around Russia: 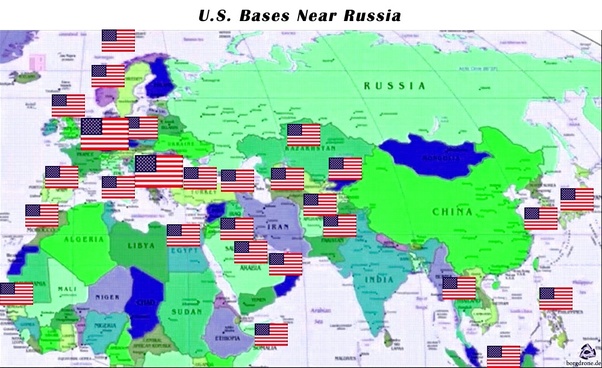 this should be an interesting thing

not watched it yet, but i was watching Tim Pool's live pod cast thing, and they started talking about this woman that's related to infowars (not a channel i like), but she has just been arrested for burglary apparently... there's a video of the arrest, and she's like wtf. apparently it's related to a 'documentary' which i guess has some classified information in it.. and alledgedly they stole the classified information?

something like that, but they sent a copy of it all to the white house accordingly to get it de-classified, and she was arrested the day before the premiere... so checked out her twitter page, one of the sections is talking about a "whistleblower" that got banned a few days ago. so looked up her... she's got a youtube channel, and has uploaded the documentary that the other woman got arrested for

so im gonna watch it.

premiered 7 hours ago... probably wont be up long.

lol not sure this is gonna be as sinister as i thought.. 10 mins and they're talking about localized advertising as if it's mind control.. i mean it kinda is i guess, cos they are being fake to appeal to certain people.. but it's pretty standard..

i dunno.. i dont think any of this stuff works on me, i just know too much.. im not really impressionable at all. you can tell me X, Y or Z, and i'll tell you back 10 things related to or contradicting X, Y, or Z... while ironically also being aware of 10 things that support X, Y, and Z... but i guess it might work on normal people :S
see you can tell me something, and that wont be 100% of my knowledge on the topic.. it'll only be like 5% at most, if i even believe it.
it annoys the shit outa me that, cos people will tell you something, and expect you to then be convinced, or they think you've not listened/understood. and it's like, nah, i listened to you, i just disagree, cos i know 10 other things as well.

it is annoying and frustrating how dumb/simple most people are tbh... you can practically flip people on a dime, it's ridiculous.


i suppose the big thing is gonna be that they'll point out it's all done by algorithm and controls people through social media using those same tactics... it's not really news that tho...

oh i suppose as much as you can flip people on a dime, you can probably give them confirmation of what they think, and make them into zealots... hm.. okay yeah, fair enough. it's not really a secret though is it? i dont fkin know... how dumb are normal people?
... probably a lot dumber than i think :/


... like do people get that everything they see in the traditional media, and on social media, is literally curated and tailor made for them? i dont really trust anything that is proffered to me, cos like, why? what do they want? it's always something. always.

funny one was when i went to an official website and i couldn't figure out where the enter button was. then i realized it was massive, colourful, and in the middle of the screen. my brain had just filtered it as spam/advertisements, cos it's like i've been trained to ignore obvious stuff by all the internet ads and pop-ups.

but the point is that these things like the news and social media.. they dont just give you the facts and let you make up your own opinion. they literally know what they want you to think, and they aim to maneuver you to that point.

as soon as you know they do that tho, it loses all it's power and their shit is obvious, but people do know that's what they do... right?

maybe it's just me.. i've been told on a few occasions that i should try being a "yes man", but honestly... my natures the opposite, im literally a natural naysayer. but i suppose that's what makes me immune to it :S
AoS Paladin 4eva

oh i get it. it's saying basically the government contracts private firms to do their dirty work. the military paid one such firm to make propaganda dissemination software, then the private company kept all the software, and were hired by like the Democratic party to invent all the russia stuff.

the Ukraine stuff is fascinating

california and new york using it as like their dirty ops department.
explains much.
AoS Paladin 4eva

okay so basically it's just globalism. but it's way worse than you thought.
AoS Paladin 4eva

If you want an American assholes viewpoint lookup Jimmy dore on YouTube. He's kinda what you hate in people but he's at least got the balls to speak his mind.
Paranoid a lil bit and unrealistic since he doesn't work. His rants are gold tho.
Top

"Screenshots will never be used as evidence but more of a reference tool for us to help in our investigations."
Top
Post Reply
17 posts